Starting Out My First Year of Medical School

My first year of medical school begins in less than 3 weeks and I officially can’t believe it’s happening! Since I was accepted to my school in February, becoming a medical student has seemed surreal. It’s like I was floating through a dream that wouldn’t quite become reality. You could compare it to the concept of aging; I know I’ll be 40 one day, but I can’t quite imagine what that’ll be like until it happens. (Hopefully, I’m not the only one who thinks that way.) 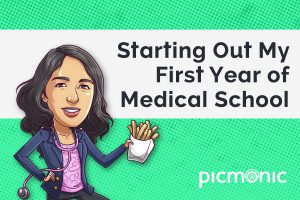 A lot of my friends have already started and are almost done with their SECOND WEEK! I can’t imagine what that must feel like, but judging by their unwavering smiles and excitement-filled Snapchats and Instagrams…it probably feels amazing! There have been lots of things on my mind leading up to school. I hope these thoughts are normal and that at least one of you out there can relate!

My First Year of Medical School

One thing I’m a little apprehensive about is the move, and not so much the actual shift (this will be my 6th time moving) but more the fact that I’ll be moving out of my parents’ home. Get ready for this: I’ve never lived away from my parents. *Gasp!*

Or maybe you’re not so shocked (I get a lot of mixed responses when I reveal this to people so who knows). I’ve come to realize that I’m a little more attached to my family than most people my age, so, needless to say, it’s a scary thought breaking away from them and living all on my own in a new part of the country.

So Many Changes on the Horizon

A new city also means new roads. The other day I was looking up the hospital I’ll be going to for clinical training and figuring out how to get there from my house. I’m a planner. Before I set out anywhere I have a heart to heart with my GPS and figure out exactly what I need to do to reach my destination. (Siri has led me astray a time too many for me to blindly allow my life to rest in her handless hands.) So anyway, I found the route. It looked easy enough; a straight drive, a right turn, and a few left turns and I’m there. I felt pretty relaxed at this discovery…until I remembered that left turns are rarely allowed in the city I’m moving to. *The utter horror.* It’ll be an adjustment…but hey, physicians are all about flexibility, right?

The only other thing that intimidates me, which I’m sure is on every medical student’s mind, is the rigorous studying we’ll have to do for the next 4 years (and actually the rest of your life; my dad, who’s been a physician since I was born, is preparing for an exam as we speak). I’m convinced that, secretly, every medical student loves studying (I know I do). I’ve been talking to other medical students in the Picmonic community, to see what they would recommend for the first year of medical school. Here’s a list of what I’ve been told:

You can probably tell from the list that I’ve had Anatomy on my mind, and that’s because that’s the class I’m most scared for! I didn’t get much dissection experience in college (aside from the routine heart and kidney). I did get to dissect a cadaver during my junior year though, and while I forced myself to volunteer to make the first incision, a lot of what happened is a blur. (What’s not a blur is the vivid memory I have of one of the lab technicians handing me a pair of rib shears and saying, “Cutting through ribs is like cutting through cabbage. I love it!”) One of my friends who just completed her first year of medical school was telling me horror stories about how everything in her cadaver looked exactly the same and that her cadaver was placed in really awkward positions during her lab practicals. So…I’m a little nervous.

Now, I share all of this with you NOT to scare you, but to mentally prepare you so you can stay ahead of the game. We’ll ace this and everything else together!

GET PREPARED WITH PICMONIC

What am I most excited for? To be honest, it’s the community at my medical school. The support, the inspiration, the motivation that all my peers are providing already is absolutely astounding and I cannot wait to experience it in person! I’m excited to meet new people from all over the US; different perspectives, experiences, and mindsets coming together into the symphony that is the future physicians of America. I don’t know about you, but there’s something about the promise of friendship with a new person that fills me with such utter joy!

Not to mention, that slackers are pretty non-existent in medical school. (A “slacker” in medical school is by no means the same as the regular definition of a slacker. During one of my interviews, I met an M1 whose friends said he never came to class and slept all day. Sounds like a slacker, right? They then said that even he got 90%’s on his tests. So even if he’s a slacker…he’s not really a slacker.)

I’m sure you’ve had to complete at least one group project during your undergrad, and chances are you were at least a little tense about it. You weren’t sure if Sam was going to finish his portion of the report on time or if Cassie was going to remember what to say for your group presentation (in my case Sam never even opened up the report and Cassie never showed up for the presentation…true story). Bottom line: working in groups can be difficult.

When I learned that a portion of my curriculum relied on group activities, I felt that familiar sense of dread in my stomach…until I realized that I was going to school with a bunch of students just like me. Your first year of medical school is going to be an entirely new playing field; you go from being a big fish in a small pond to being a small fish with equally small fishes all swimming together in an ocean (remember how hard it was to find Nemo?). I know a lot of people look at that as a threat, but I think of that as a huge sense of comfort. If you’re working with a group of people without the fear of being let down, then aren’t you just left with a giant hangout session? (Think about it and it’ll make sense.)

Finally, I’m looking forward to actually feeling like I belong in a hospital environment. (Rather than feeling like a little scribe running after physicians while simultaneously trying to stay out of everyone’s way). The degree of confidence and competence that doctors have is what I can’t wait to experience. Remember my aging metaphor from before? This is like that too.

I watched this the other day:

It may take a while, but I know one day, if we’re going to be taking care of patients, we have to get there!

We have a long road ahead, but it’s going to be the best road trip of our lives!

Keep up with Aimen’s journey in her first year of medical school by following her on Instagram @lil_waimen.

Download our mobile app and take Picmonic on the go!