[Infographic] How to Study: Addisons vs Cushings

Addison’s is caused by the hypofunction of the adrenal gland which may be caused by primary adrenocortical insufficiency or lack of pituitary adrenocorticotropic hormone (ACTH) secretion. Conversely, Cushing’s syndrome is caused by excessive amounts of the hormone cortisol being produced in the body. To treat Cushing’s one should “cushion” the amount hormone given. 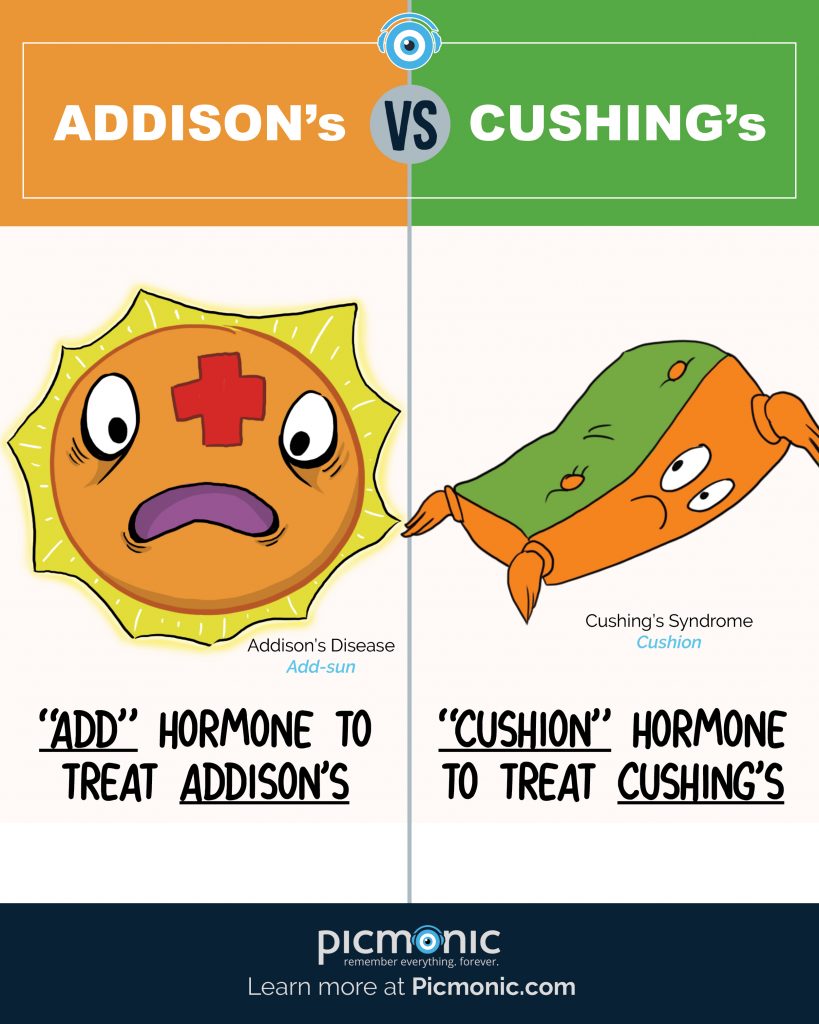 Some topics you will learn in this infographic:

Chronic 1° Adrenal Insufficiency:
Addison disease is a chronic primary adrenal insufficiency which can be due to atrophy from exogenous cortisol intake, or due to destruction.

Increased POMC:
In Addison disease, there is a decrease of adrenal hormone secretion, but a large increase in ACTH. The precursor to ACTH is POMC (proopiomelanocortin), and is also a precursor to MSH (Melanocyte stimulating hormone). As the demand for ACTH increases, an increase in its precursor also leads to excess MSH production, leading to hyperpigmentation.

More Common In Women:
Women are more affected with Cushing syndrome than men, at a ratio of 4:1. This is often because of Cushing disease, due to pituitary adenoma.

Primary Adrenal Disease:
This can be either adrenal hyperplasia, adenoma or carcinoma. It is characterized by hypercortisolism, due to secretion from the adrenals, and low ACTH. As these are 1° adrenal disorders, cortisol secretion is always elevated and does not respond to high or low-dose dexomethasone suppression tests.