There’s a Picmonic for That!: Brachial Plexus

In medical school, a strong grasp of the origin and evolution of different anatomical entities is extremely important for exams. The brachial plexus is a beast when it comes to memorizing all the important facts, delineations, segmentation, etc. Picmonic can help you learn and recall all the details while gaining a deeper understanding of the bigger concepts.

If you’re studying anatomy and the brachial plexus keeps you up at night, rest easy — there’s a Picmonic for that! And, in this case, a series of five Picmonics! 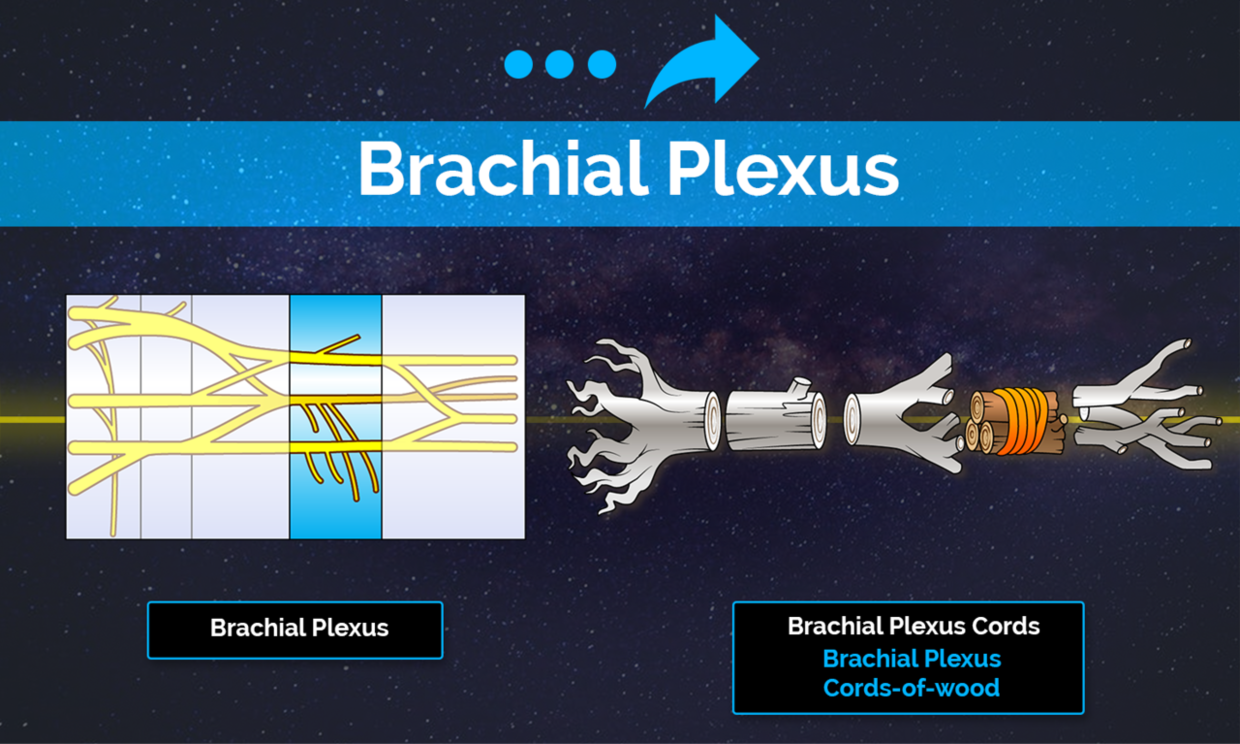 So to summarize the brachial plexus roots, they are formed by C5 through T1 ventral and anterior primary rami, and they give off the long thoracic and dorsal scapular nerves.

Brachial plexus trunks, pictured here with brachial plexus tree trunks being felled by the lumberjack, refer to nerve bundles in the brachial plexus. The superior trunk, the super trunk above all, is formed by the C5 and C6 roots. Damage to this trunk results in Erb-Duchenne palsy, characterized by the waiter’s tip arm, where the arm hangs medially rotated and forearm pronated. It gives rise to the suprascapular nerve, the super-scapula nerve, which innervates the supraspinatus and infraspinatus muscles. The middle trunk, the metal trunk in the middle, is formed by the C7 root. It contributes to multiple nerves including the median and radial. Lastly, the inferior trunk, shown by the inferior trunk beneath, is formed by the C8 and T1 roots. It contributes to the ulnar and median nerves.

Brachial plexus cords are shown by the three brachial plexus cords of wood in this Picmonic. The lateral cord, ladder cord, is formed by the anterior divisions of the superior trunk, C5-C7. It branches into the lateral pectoral nerve, ladder pecks nerve, which innervates the pectoralis major muscle. The posterior cord, post cord, is formed by the posterior divisions of all trunks and has several branches. The upper subscapular nerve, the upper sub-scapula nerve, innervates the upper part of the subscapularis. The thoracodorsal nerve, thor-rocket-dorsal-fin nerve innervates the latissimus dorsi muscle, while the lower part of the subscapularis is innervated by the lower subscapular nerve, lower sub-scapula nerve. The medial cord, shown by the metal cord, is formed by the anterior divisions of the inferior trunk. It branches to the medial pectoral nerve, metal pecks nerve, which innervates the pectoralis major and pectoralis minor, as well as the medial cutaneous nerve of arm and forearm, shown by the metal skin nerve with arm and fork-arm. This innervates the medial aspects of the arm and forearm.

Brachial plexus branches are represented here by the literal brachial plexus branches. The branches include the musculocutaneous nerve, depicted by the muscle-and-skin nerve, and innervates all arm flexors and skin of the forearm. The axillary nerve, shown by the ax nerve, innervates the deltoid and teres minor muscles, which laterally rotates the arm. The radial-tire nerve represents the radial nerve, which innervates all arm extensors and the forearm. The median nerve, median-road nerve, innervates most forearm flexors and 5 hand muscles. Lastly, the ulnar nerve, underwear nerve, innervates 1-1.5 flexors in the forearm and the remaining hand muscles.

So recall that the brachial plexus branches include the musculocutaneous, axillary, radial, median, and ulnar nerves.